In our Landsknecht/German Garb at Court. Photo by Lady Arielle

The Landsknecht were famed German mercenaries from the late 15th century to the middle of the 16th century. The daring soldiers were well compensated for their dangerous work, and when you combine that with the fact that they were exempt from most sumptuary laws, you get a group of people who enjoyed dressing flamboyantly. Their clothing tended to be bright (dye was pricey) and slashed (showy and hid tears and rips). Feathers were common because the merchants who followed the train sold them, and it was easy to buy one and just “stick a feather in your hat.” To learn more about the history of the Landsknecht, I highly recommend the 2002 book, Landsknecht Soldier by John Richards — it is well researched and illustrated.

A number of resources for Landsknecht garb is available online. Here are links to several I find very helpful:

Renaissance Costuming FAQ – Scroll down to the section on Landsknecht about midway down for a good overview of what men and women wore.

St. Maximilian – The web site of a company of the St. Maximilian Landsknecht Re-enactment Guild (check out the Costuming Guidelines).

Landsknecht Guild of St. Maurice – Check out their Resources page!

Landsknechtsportal – Translated from German, and not updated recently, but full of patterns, information, and cultural information

The Real Landsknecht Page – A bit hard to follow, but some useful images and information

The Frazzled Frau – An entire web site documenting German women’s garb. There isn’t much Landsknecht specifically, but several of the styles in the first half of the 16th century translate to female Landknecht wear

Woffenrock Dress Diary – Not entirely period, but interesting — and contains a number of links to source images which are helpful.

Hats and Underwear of the German/Swiss Woman from the 15th century – Not in English, but full of great information.

Woffenrock by Reconstructing History – I used this to make Gregor’s Woffenrock and I think it turned out well.

Kampfrau or Common Woman’s Dress by Reconstructing History – Haven’t used it, but have it

We now have exactly three weeks before we hope to depart for Pennsic. And between the three of us, we each have maybe 1-2 outfits appropriate for camping.

It’s time to crackdown and make our garb! So I’m setting a goal for myself — one piece of garb a day for the next three weeks. I’ve even made myself a little schedule…

There we go…. if I meet my goal each day, I will have enough garb for the three of us for Pennsic! I think this is doable — I’ve done each of these things in one day before, and I certainly didn’t spend all day doing them (which is good, as I’ve got my day job to do, too!) If I am good, I will move a little ahead in my schedule and buy myself some extra time so I’m not sewing sleeves the night before we leave. 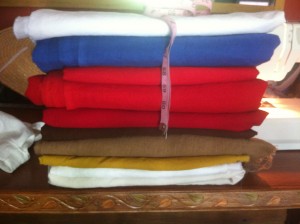 I must turn this stash into wearable garb!

Can I actually do it? Well, as I’m big on goals and rewards, here’s my plan. Each day I complete my goal, I’ll cross it out on the chart above and post about it on Facebook and/or here on my blog, to keep myself honest. And if I complete my goal, my reward is some truly awesome thing from a Pennsic merchant — not sure what I’d get yet, as I need to see what they are selling, but I’ll know when I see it.

So, here we go … today’s goal: a smock for me made of tissue linen (it’s already prewashed and ready for cutting).