Simple Blue Tunic (And How to Sew Gores!) 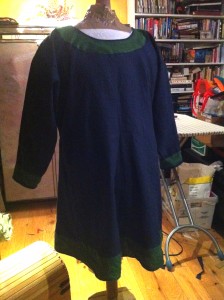 Today’s Garb-a-Day project was a simple blue tunic. I had just two yards of  linen to use, but Gregor’s tunics really required more like 2 1/4 yards (to get his desired length of 41″). So I just added a band of green linen to the hem to make it longer, then added the same green as trim around the wrists and neck. I cut the green linen for the neckline on the bias, so it would be a bit more flexible. That works, I think!

The tunic design I use is based on an extent garment from the Bochsten Bog, and as such, it uses several gores (triangular pieces of fabric that made the tunic flare out a bit at the bottom). When gores are placed on a seam line, they are simple. But when you have to actually cut the fabric and insert the gore, as you do with this tunic, it gets much tricker! The first time I did gores, I had no idea how to sew them.

Google is my friend, and I found this tutorial: http://www.cottesimple.com/gores/gores.html

This explained the basics, and it worked … but I noticed a slight pucker in the fabric at the top of the gore when I stitched the gore with my sewing machine. The pucker appeared on the next tunic as well, and at that point it bothered me enough to do more research. After reading a great deal about how to make perfect gores, I decided to try hand-sewing just the gore point, then machine sewing the long seams. It worked! This tunic now has perfectly-pointed, pucker-free gores — hooray!

No Comments to “Simple Blue Tunic (And How to Sew Gores!)”