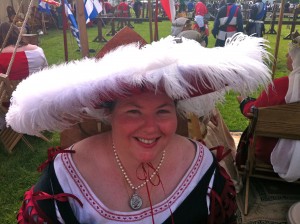 Genoveva at the spring Coronation of Savaric and Julianna

Genoveva von Lübeck is from Lübeck, Germany. She was born in 1468 to a Lübecker Bürgomeister (mayor) by the name of Christophe von Wickede and his wife, Eva von Tode. She has birthed one healthy child, a son, from a marriage that ended in an early death. She is now a wealthy widow that enjoys and supports the arts, sciences, and services in her community. Rumor has it she occasionally disappears for months at a time with the local Landsknecht (mercenary army) and joins the tross (army train) for it is said, in scandalous whispers, that she has a Liebhaber amongst them and that is how she enjoys such a high standard of living for being just a mere widow.

Clothing Styles: First half of the 16th c. of the Swabian region in what is now Germany. (In other words, 16th century German, mostly the first half of the century), with a little bit of Viking, Tudor, and Flemish throw in — time period ranging from 1468-1550 (15th and 16th centuries) 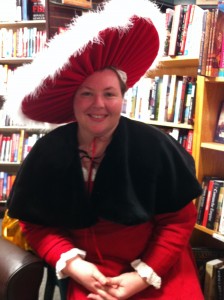 SCA Events & Meetings I Have Attended (most recent first):

(bunch of stuff here — need to update this list!)

5/4/13 – Coronation of Lucien and Catarina in the Barony of Ayreton (Chicago, IL)

(so many events — need to fill this gap in!)

4/14/12 – Pentamere A&S Regional Competition and Terpsichore at the Tower in Saline, MI (entered two projects into the competition: my blackwork and goldwork caul and my 16th century German goldwork gown)

Note: I’m going to stop listing meetings as I pretty much attend every baronial meeting now 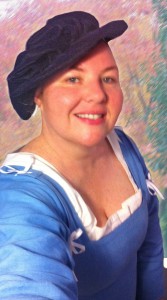 Genoveva in a 16th c. kirtle

12/3/11 – Grand Tournament in Livionia, MI (received an award for Best Heraldic Display — my prizes were two lengths of trim, a blank journal, and a book on Medieval Furniture). I also made two oak banner stands for this event, one I kept for my banner and the other I donated as a tourney prize.

10/23/11 – Red Dragon (Toledo, OH) — I became a member of House Gramorginn and became protege to Duke Dag Thorgrimsson at this event.

Genoveva in a Flemish Gown

8/2-8/14/11 – Pennsic XL at Cooper’s Lake, Pennsylvania (submitted my name for registration with the SCA on 8/11) – (Flemish Gowns, simple kirtles with smocks — very hot and humid there!)

Genoveva in a Tudor Gown

7/9/11 – Saline Celtic Festival, Saline (Flemish Gown) [AnnArbor.com article with a photo of Genoveva and her son]

1997 – 1999 – Seige of Talonval in Chelsea, MI, plus numerous meetings and another big event I cannot remember the name of anymore

5/2015 – Received a first place award in the category of Costume: Single Component in the Kingdom A&S Competition

8/2014 – My son received his SECOND Silver Acorn award at Pennsic!

7/2013 – My son received the Silver Acorn award for his pursuits in Arts & Sciences!

5/27/13 – Received a first place award in the category of Costume: Single Component in the Kingdom A&S Competition

12/3/11 – Received an award for Best Heraldic Display at Grand Tourney. I wore a heraldic cape and skirt, and displayed my device on a miniature shield, gonfalon banner, and chair.

9/24/11 – Received my Award of Arms (during evening court at the Coronation of Their Majesties, King EikBrandr and Queen Runa) in Toledo, Ohio

Member of The Barony of Cynnabar (Ann Arbor, MI)

Protége of Master Dag Thorgrimmson (since 10/2011)

I have two personal web sites:

HonorBeforeVictory.com – My general SCA web site in which I talk about camp projects, non-German garb, and anything else related to the SCA. I share this blog with Gregor.

I also maintain a web page at the MiddleWiki

I also create several event web sites for Cynnabar (such as Grand Day of Tournaments), maintain the Midrealm Cartography web site, and maintain the Seneschallorum.

No Comments to “Genoveva”