An Apple Green Kirtle (And, Pink is Period!)

I now have a very nice apple green kirtle that will serve as an underdress for my Flemish Gown. The kirtle went together well from the pattern I’d made. I decided not to line the underdress for now, as I’ll be wearing the overdress which will have two layers of linen plus the linen smock, and that seems like a lot. If I don’t feel too hot in four layers of linen this weekend, I’ll go ahead and line the underdress with more linen later. So I just need to finish the neckline, hem the bottom, and complete the hand-bound eyelet holes on the side (I decided to make this a side-lacing kirtle).

Once that is done (today, I hope), it’s time to move on to the overdress. It is supposed to be a darker green (Juniper from Fabrics-store.com) and a golden yellow. I’m just not so sure about the yellow with the green, however. So I think I’m going to switch colors from my palette and do the pink color with the green overdress and move the yellow over to the blue dress, so it’ll look more like the picture on the right. 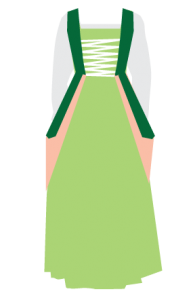 I think the pinkish color goes better with the greens. And, yes indeed, pink is period. I used it on my first-ever SCA dress in the ’90s, then thought, “wait, would they have worn this color back then?” and decided no and didn’t wear it again. But since returning to the SCA, I’ve discovered that pink is very much period. I don’t know where I (and others) came up with the idea that pink wasn’t period. There are many, many plants that will make pink, or light red, dyes, so it makes no sense that it wouldn’t have been used. Perhaps it’s just that pink, especially a color like hot pink, seems very modern. Also, I think the word “pink” isn’t an ancient word, it’s usage as a noun dating back only to the 17th century — I’ll bet that’s why it seems modern. Thankfully, the color itself is period, because I happen to love pink. It’s my second favorite color after green!

So pink linen … yeah, don’t have any of that either. Guess I need to dye more linen. Rit makes two pinks … a petal pink and a rose pink. Rose is too much; so I think it’ll have to be petal pink. I may not dye it quite so much, though — I don’t want a bright pink! So I guess a trip to Joann’s is in store for me later today after work.

I’m lovin’ this dress so far!

Drafting Patterns for Smocks and Kirtles

I finally got the chance tonight to begin my Pennsic garb sewing. I decided to start with the simplest garment, the smock, and work my way out. I drafted a pattern based on my measurements and the instructions at http://www.elizabethancostume.net/smockpat/. I cut out some inexpensive muslin, sewed it, and it worked!! The smock was surprisingly easy to make and looked good. The only thing I’d change from my original pattern are the sleeves — I want them to be a bit wider and a bit longer — I think an inch at least.

So after my success with the smock, I moved on to the kirtle. I didn’t have any muslin for that, so I raided my stash of cheap fabrics procured from Scrap Box (recycled materials shop) which cost nearly nothing to me. I found some ugly brown twill that I think must be at least part polyester (but it wasn’t stretchy!) and used it to make a kirtle. Again, I drafted a custom pattern from my measurements and these directions: http://www.elizabethancostume.net/kirtlepat/gored.html. I decided to go with an A-Line Kirtle because I like the option of wearing my farthingale under it. The first try worked pretty well, though I think the shoulder straps need to be a bit shorter and the waist narrower. Those are both very easy to fix when I go to use the actual linen for the real kirtle. I tried my farthingale under it and it looked good.

Unfortunately, I didn’t measure the brown fabric before I cut it, so I’m not sure how much material I needed. If I were to guess, I’d say between 3 and 4 yards. The circumference of the skirt bottom is 132″, but I pieced it to make the most of the material. I think I’ll take apart the brown test kirtle apart and lay it out on my linen, using it as a pattern.

All in all, great progress for the evening! Once the patterns are down, I think I’ll be able to cut and sew these pretty easily.