Yesterday I presented a 14th c. embroidered bycocket cap of maintenance for Master Gregoire de Lyon on the occasion of his elevation to the Order of the Pelican. I am pleased with how the cap turned out and thus thought it would be a good idea to document it in my blog for future reference (both mine and possibly yours!). In particular, I learned a new seam technique and I want to record it here so I do not forget it. Here’s the completed cap of maintenance (or cap of high maintenance, as Master Gregoire calls it): 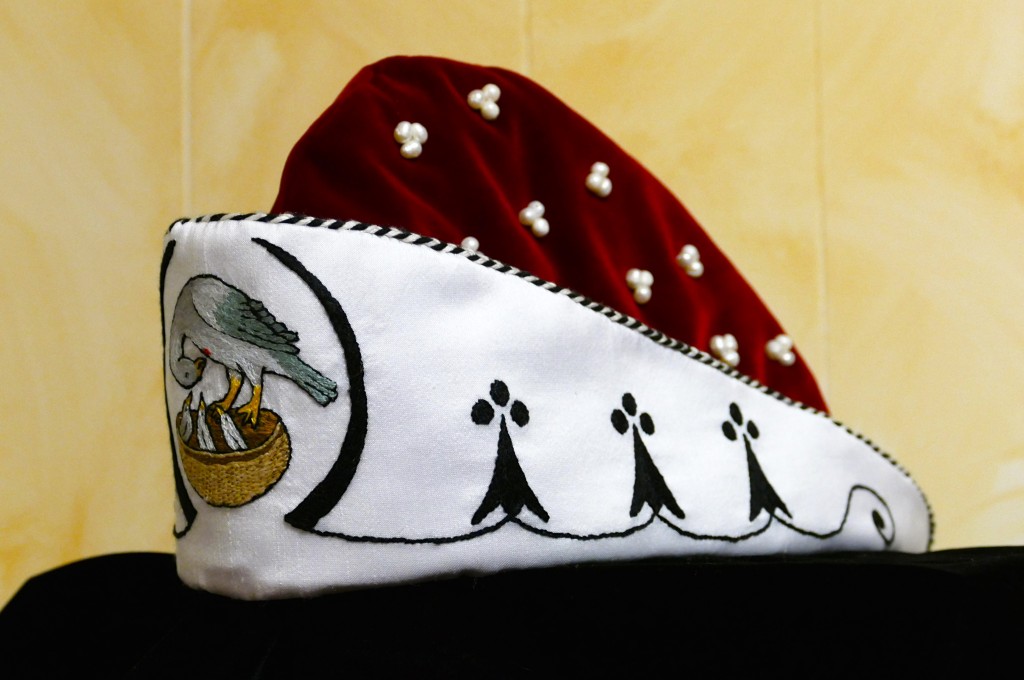 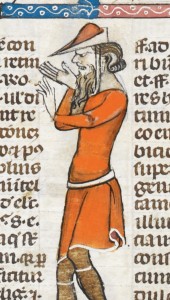 Research: The bycocket, or chapel à bec as it was known in France, was all the rage in the 14th and 15th centuries in northwestern Europe, but it did continue on sporadically into the 16th century. The bycocket shows up frequently in imagery of the time period, but my favorite image is found in margin of The Decretals of Gregory IX c. 1300-1340 written in Southern France (page 40v). In the image, a man wears a red bycocket with a white lining. Another favored image with the same hat style and coloring appears in the 1344 painting “The Effects of Good Government in the Countryside” by Ambrogio Lorenzetti (rider on the left, note that her brim may be decorated).

Construction: The shape of the bycocket looks more complicated than it is. It’s really just a bowl-shaped hat with the brim turned up at an angle. I used a wool felt bycocket that Gregoire already owned to fine-tune the size and shape, as that was his preference. The resulting pattern looks something like this: 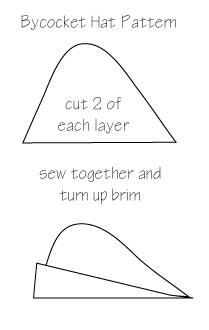 Materials: Dark red velvet (outside layer), white linen (inside layer), white linen canvas (interlining, for stiffness), wool batting (interlining, for shape), and white silk taffeta (outside brim layer). I used the canvas and wool batting to give the hat some solidity and structure. The order of layers from the outside to the inside is as follows: velvet, wool, canvas, linen. The silk taffeta was whip stitched onto the brim and only the brim in order to leave the white linen as the layer next to the hair (at Gregoire’s request), the thought being that it would be a touch cooler and easier to clean. Additional materials included silk embroidery floss (12 ply Splendor thread), silk sewing thread (Gutermann), and freshwater pearls.

Embroidery: Inspiration for the embroidered pelican came from the Pienza Cope, a richly-embroidered cape worn by Pope Pius II and currently housed in the Diocesan Museum in Pienza. The cope dates to 1310-1340 and features a beautifully embroidered orphrey (medieval pelican). Like the original inspiration, I used split stitch and couched silk in my embroidery, which are some of the stitches used in opus anglicanum style embroidery. And as I wanted the embroidery to feel fine and regal, I used just one ply of the 12-ply silk to work the stitches. This was time consuming (altogether the hat’s embroidery took about 40 hours), but the result was very rich looking. The overall design, with the three ermines and the lines that connect them came from Mistress Melisant, who quickly sketched it on a piece of scratch paper and it was — of course — perfect!! 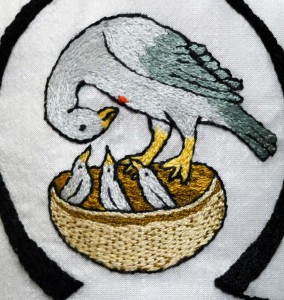 Split Loop Stitch: Once the embroidery was completed on the silk taffeta, I had to attach it to the brim of the hat and I began considering a decorative stitch or trim along the top edge of the brim. Initially I planned to do a fingerloop braid, but I didn’t find a huge amount of evidence for it in the 14th century. But this lead to a seam technique used on 14th century bags that turned out to be perfect for this project. I found the stitching on an embroidered bag currently housed in the Victoria & Albert Museum (8313-1863). Master Richard studied this bag in person and notes this about the seam on his website: “The seams at the sides and around the mouth of the bag are covered/decorated with a double split stitch of dark red or purple silk and what appears to have been gilt floss … This decorative stitching is composed of two sections, each running up one side seam and around one edge of the opening. This can be seen illustrated in the second pattern sheet. How this decorative stitch was done is unknown.”

I recreated this decorative stitch using two long loops of silk thread and a single length of silk sewing thread, and the end result looks very much like the purse’s stitch. The resulting seam is practical and pretty. Here’s how I did it:

Step 1: Create two loops of silk thread in contrasting colors. The loops should be at least as long as the seam you wish to stitch, plus a little extra. For example, the brim length was 33″, so I cut silk thread lengths of 80″ to fold in half and knot, producing 40″ loops.

Step 2: Put the knots of the two loops between the two fabric sides where you wish to begin the seam. I sandwiched the knots in between the fabric, hiding them. Make sure your loops are not tangled in each other — you need the loops to move freely. Stitch the knots into place with a single length of silk sewing thread. 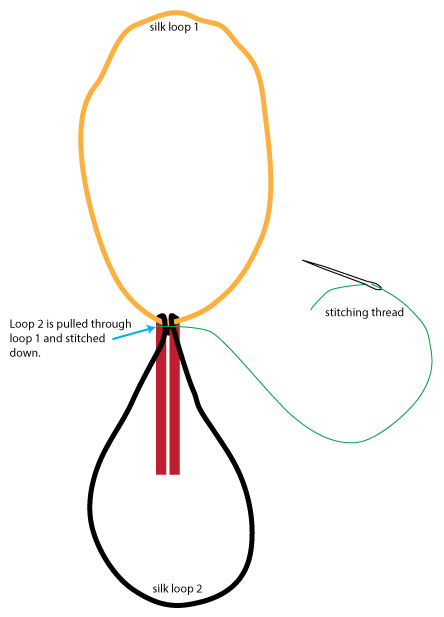 Step 4: Repeat step 3, but this time pull loop 1 through loop 2 and then stitch down loop 1. Repeat steps 3-4 until you are done! 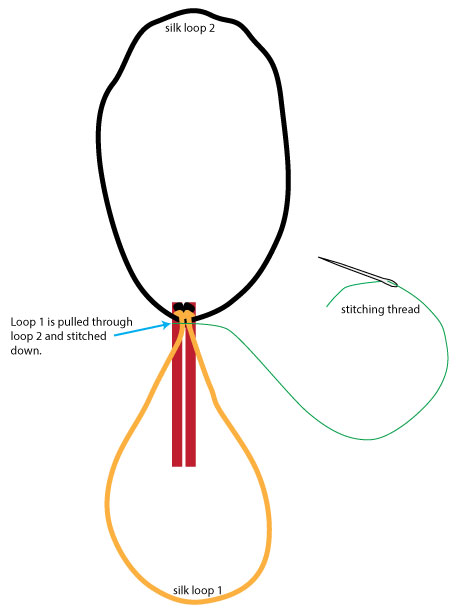 Here’s a 14th century bag with this seam:

Finally, freshwater pearls were added on the top of the hat, inspired by this image of a beautiful recreation of 14th century bycocket.

And here is a photo by the talented Lady Daeg (called “Daye”) of Master Gregoire in his new cap of maintenance: 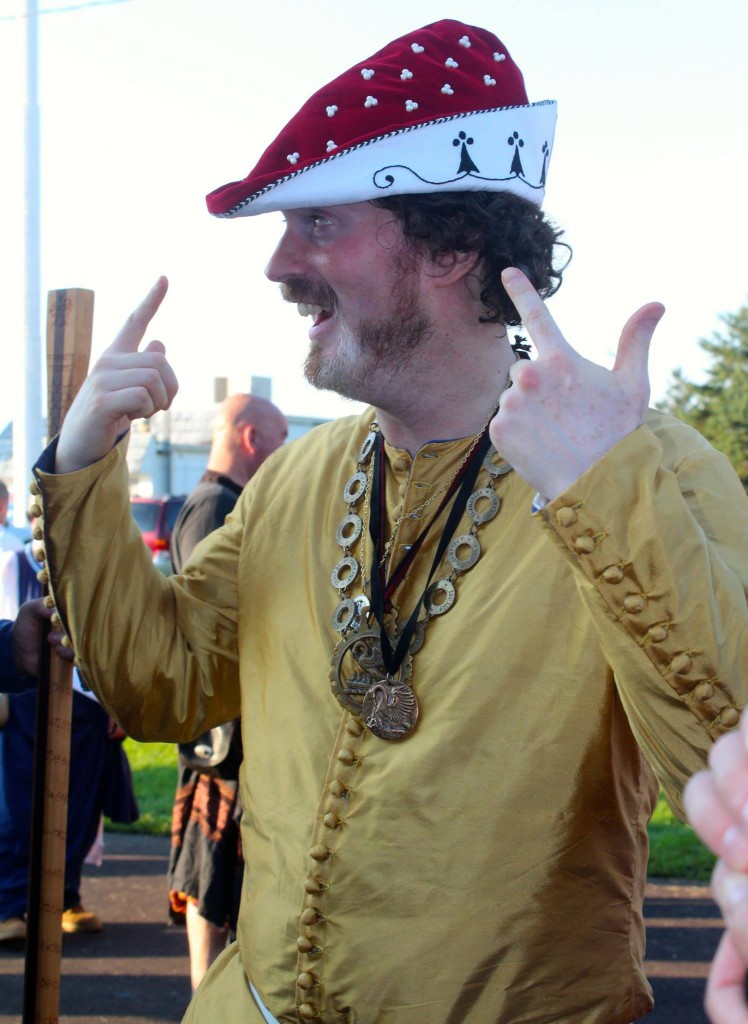 The gold silk cote was made by Mistress Giovanna, by the way — isn’t it beautiful?

If you have questions, please post them here or e-mail me at genoveva.von.lubeck@gmail.com.

What is a medieval encampment without proud colors to fly over it? I’m to paint a pair of silken standards for Genoveva and myself and today finished a cheap “stretch-frame” so that I may begin painting this Thursday ( July 7th ). The frame is made out of 3/4″ PVC, 20 large binder clips, and lots of rubber bands… quick.. simple…cheap ( $12.00 ). Plus I can always spend another dollar and re-size the frame for other projects in the future. This will be my first attempt at anything even remotely like this and I look forward to the experience.

Note: It may look uneven now… but that’s just because I only put it together temperately for a few quick pictures (before the rains come’ith!) 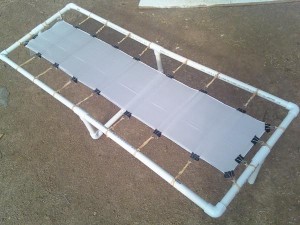 Silk Standard on a Stretcher 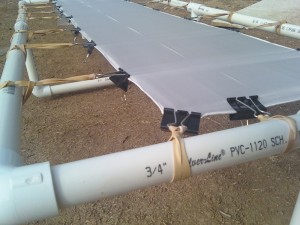 The binder clips keep it secure

Many thanks to my good friends Charles and Kathy for the idea!