Saline Celtic Festival: Demonstrating the Gentler Arts of the SCA

Today my son and I attended the Saline Celtic Festival with other members of the Barony of Cynnabar. Our mission? To demonstrate many of the wonderful aspects and arts of living in the “current middle ages.” I’d been preparing to attend this event for much of the week, finishing off our camp chairs and my new Flemish Gown. I arrived early this morning to set up our chairs — which I’d just finished staining and gilding yesterday — and my large loom showing a tablet-woven band in progress. Here was our little corner of the Cynnabar tent: 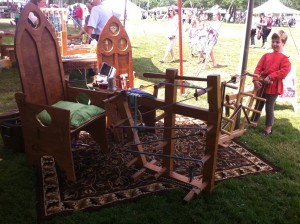 Our gothic camp chairs and my large loom

The chairs were WONDERFUL! Easy to put together and take down, they looked great, they felt comfortable, and I received many comments on them. I’m really happy I made them! Oh, and I did make that “cupholder” for Alexander — you can sort of see it in the above photo.

Also “in action” today is my new Flemish Gown. It wore well, and I received many compliments on it. Nothing ripped or fell apart — always a bonus! Only problem is that I really should have lined the kirtle — it just felt too flimsy with one layer of linen. So I’ll be doing that, as I loved it otherwise, and it was a remarkably comfortable outfit. Alas, I was pretty hot in all those layers. If it gets that hot at Pennsic (it was 95°F today), I’ll probably have to wear just the chemise/smock and kirtle, or I’ll exhaust myself from heat early in the trip! Also, I need to make myself a caul (headscarf) to keep my hair up and off my neck — my hair was just making me feel hotter! But thank goodness for that old straw hat I had!

I had a great time talking about, demonstrating, and teaching the tablet weaving. Even my son Alexander got in on the action and showed off his “Golden Path of Fire” band to others — in fact, a woman from one of the local news organizations took his photo and name while he was demonstrating his weaving. Maybe he’ll show up in an article or something! Update: Yes, indeed — a photo of both Alexander and I appeared in the article about the Celtic Festival on AnnArbor.com today! Here we are: 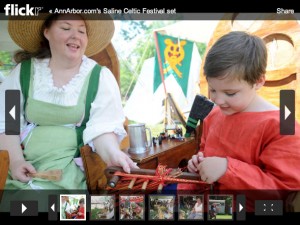 As we appear in AnnArbor.com's article!

Update 7/13/11: Turns out Alexander made the local news again! Here’s a video posted at Saline-Milan.Patch.com — in it you can see Alexander with Alex the Blacksmyth (around 1:04). Cool! 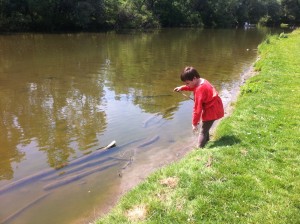 My son in his red linen Bocksten tunic

Speaking of my son, he “bought” me this pretty, sterling silver ring. He spent all of his own spending money on it, and I made up the rest. It was completely his idea. He chose the heart because that’s always been an important symbol between he and I — we draw hearts on notes for each other all the time. He didn’t even know that the Claddaugh ring is traditionally given as a token of love, and that I’ve always wanted one. I haven’t worn rings in years, but I used to love them. I will always cherish this ring from him! 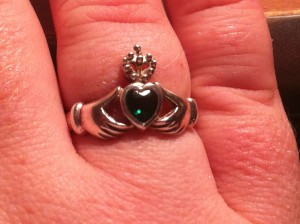 My Claddaugh ring from my son!

All in all, a great day! Notes for my next event …

6 Comments to “Saline Celtic Festival: Demonstrating the Gentler Arts of the SCA”

Leave a Reply to Laurensa