My son has been wanting to try his hand at tablet weaving for some time now! We bought him some gold thread (he’s really into gold lately) and we warped it onto my small loom with some red thread. Alexander chose a simple pattern of chevrons (or “arrows” as he calls them). This pattern has just 11 cards and you turn the cards all in the same direction until you want to go back in the other direction. Here’s the threading pattern:

He’s watched and helped me tablet weave before, so understands terms like shuttle and shed, and knows that he has to turn the cards and pass the shuttle through. I had him watch me a few times, then he tried it … he did well, though I don’t know how well he’ll be able to stick to the pattern. The cards can easily turn the wrong direction when being slid up and down by little hands. But this is such a simple pattern, that even if it gets messy, it’ll still look cool … all that red and shiny gold! Here’s the part of the band that we did together… 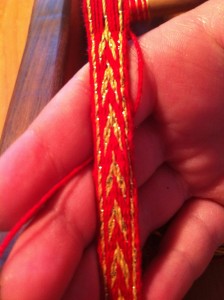 Alexander calls this the “Golden Path of Fire” band. I think it looks very nice!

My next project (on the larger loom) will be a band for an SCA friend of ours (Charles). He’s requested a band like Emerald Waves of the Crimson Guard, but with yellow instead of green. As soon as I finish the Cynnabar band on that loom, I’ll begin on the new band. Charles, if you’re reading this, it shouldn’t be too long before I start! 🙂