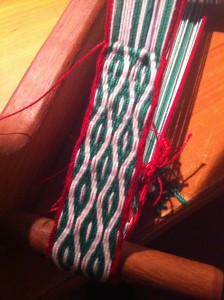 This is a pretty simple threaded-in pattern — the work is mostly in the threading of the cards, not the actual weaving. I got the pattern from a German site (Flinkhand.de). It takes 24 cards and three colors — here’s how the cards were threaded:

The card turning is very easy — four forward, four backward. It’s a great thing to do while Gregor and I are playing the D&D (Dungeons & Dragons) game he made for me (which is amazingly awesome, I must say). I’d love to say more about the D&D game, but well … I better ask him first!

This band is for my Irish dress, which I’m making for the Saline Celtic Festival which is being held July 8-9, 2011. I should start working on the dress itself, but I want to wait until at least July 1. Not only do I have a work deadline July 1 and really should focus on it, but I am in the midst of losing weight and want to wait a bit so the dress isn’t too loose on me. Couple weeks will do the trick!

One Comments to “Emerald Waves of the Crimson Guard Band: Tablet-Weaving Pattern”