[This is the fourth in a series of articles on SCA artisans who inspire, teach, encourage, and/or make the Society a better place for us all! I learned so much through other artisans while preparing for the A&S Pentathlon, and now it is my turn to shine the love on them, learn more about their craft, and introduce them to you.] 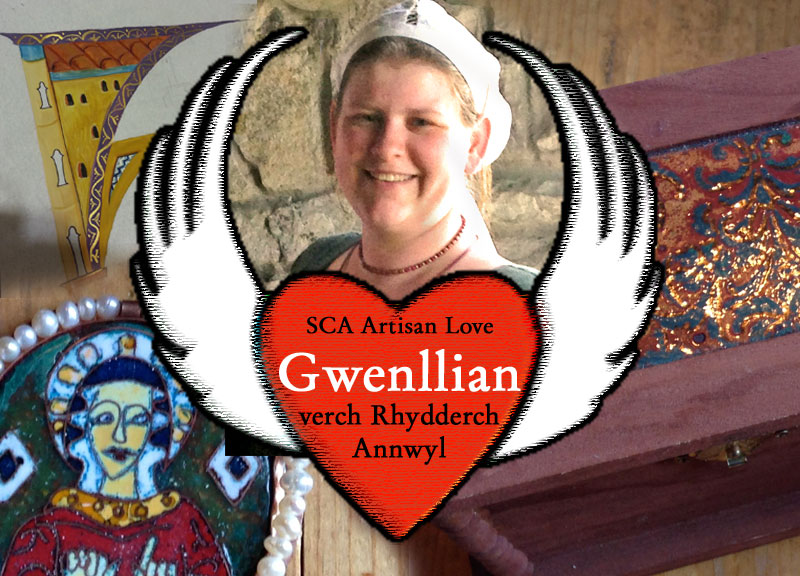 Never underestimate the power of teaching. I first met Lady Gwenllian verch Rhydderch Annwyl at a class I taught on German costuming to the Barony of Red Spears. A few weeks later, as I was perusing the class list for Baron Wars, I saw this:

Gwenllian Annwyl – Intro to Cloisonné
Create a cloisonné enamel piece of your own! Students will be provided with materials to complete a piece. Class limit:15, Time: 3 hrs-ish, Age limit: 15 or with parent supervision, Cost: $20 – includes kit, handout, instructors materials, and use of kiln

I was intrigued by the idea of learning to craft and complete a cloisonné enamel piece, an art form I’ve long admired but felt must be particularly complicated. And she was bringing a kiln, too? This was simply too good not to try. And I did … and it was more amazing than I thought it would be. Gwenllian proved to be an excellent teacher, offering just enough information without overwhelming us, answering all questions cheerfully, and providing everything we needed to create beautiful cloisonne pendants.

And as it turns out, Gwenllian is well educated in the art of enameling. She graduated from Kent State University with a Bachelor of Fine Arts in Jewelry/Metals/Enamelling, and continues to practice her skills today with cloisonne and decorative metalwork, including a few coronets. But her interests are not limited to these arts — she also enjoys costuming, brewing, calligraphy, illuminations, and heraldry. When I asked her who inspired her to learn more and push herself further, she named Mistress Cerridwyn verch Ioward for her attention to detail and her inspiration to research and pursue the answers to that all-important question,”How were things done in period?”

Not surprisingly, teaching is what Gwenllian loves most about her art. “Mine is an art that looks complicated, but can be fairly easily accomplished in a decent amount of time,” says Gwenllian. “When my students are just SO excited about this awesome shiny thing they’ve made and are just so proud of it, I LOVE it!” And that was certainly my experience — I was so enthralled with the pretty pendant I made in her class that I showed it to anyone and everyone who was willing to look!

Gwenllian’s favorite artifact created so far is the Byzantine-style cloisonné medallion she entered in this year’s Kingdom A&S Competition (and for which she took a first place). “It was a bit tedious,” she confesses, “but so satisfying. And it’s inspired me to do more pieces, try new and more period techniques of firing the enamels, and try to grind my own enamel powders.” Her medallion is really quite delightful, and looks remarkably like those that appeared on the original votive crown of Emperor Leo VI of Byzantium. 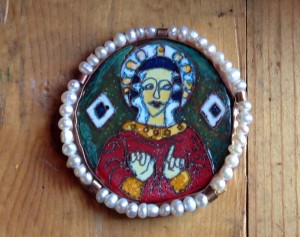 To learn more about Gwennlian’s arts, be sure to visit her blog at http://hareandfox.blogspot.com. You’ll find excellent in-progress photos of her Byzantine medallion there. Gwenllian, who has received the Order of the Willow award, is apprenticed to Mistress Helewyse de Birkestad and plans to teach her Cloisonné Enameling class again at Pennsic 43 on August 4th at 5:00 pm and on August 6th at 4:00 pm, both in classroom 4—the class is most definitely worth the three hours and you’ll leave with a simply gorgeous piece of cloisonne with your own design!

How to Make a Cloisonné Pendant

This step-by-step tutorial is based on Gwenllian’s class on June 21, 2014 — the photos and steps are those I took at the class. First, what is cloisonné’? The dictionary describes it as enamelwork in which colored areas are separated by thin metal bands fixed edgewise to the ground. The word enamel comes from the Old High German word smelzan (to smelt) via the Old French esmail. The ancient Egyptians applied enamels to pottery and stone objects, and sometimes jewelry, though the last less often than other ancient Middle Eastern cultures. The ancient Greeks, Celts, Georgians, and Chinese also used enamel on metal objects. Leading up to cloisonne in particular though, enamel was at its most important in European art history in the Middle Ages, beginning with the Late Romans and then the Byzantines who began to use cloisonné enamel in imitation of cloisonne inlays of precious stones (Faux stones?! Oh wait, we still do that today). This style was widely adopted by the “barbarian” peoples of Migration Period northern Europe. There are many examples of cloisonne that is very comparable to garnet inlay. The Byzantines then began to use cloisonne more freely to create images, which was also copied in Western Europe.

So let’s make something, shall we? It’s not as hard as it looks.

Choose your design. Start by outlining your copper circle and then draw your design inside it. Keep things simple, as each line means a piece of copper wire. Note that you are not required to have wires around each spot of color, only wires between different colors — this means you can have a color/design to right to the edge without needing wire there.

Follow your chosen design above by bending and cutting the wire to match your lines. Use your pliers and wire cutters for this step. This takes some time to get right — be patient with yourself. 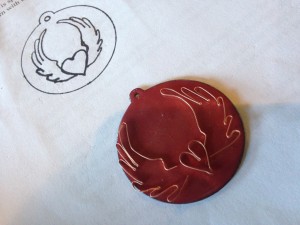 Apply an light brushing of oil to the copper circle, then transfer the wire one piece at a time to the prepared surface of the copper. This will help keep the wires from shifting when you pick it up in the next step.

Fire your piece in the kiln to approximately 1800°F long enough for the clear enamel on the piece to soften enough so that the wires ‘sink’ into the surface. This enamel has a higher melting point, so the wires should not move while firing later colors.

Allow time for the piece to cool sufficiently. The advantage of working with the smaller size is they take a shorter time to cool off. Mine took about 15-20 minutes. 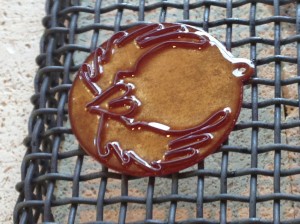 Mix some of an enamel with a small amount of Klyr-fire. Using a small paintbrush, carefully apply the enamel to your piece. Nudge the enamel into position as needed. Continue until you have the enamel colors placed on your piece up to the height of your wire, but not over it. The goal here is to create an even layer of enamel all over the piece, out to the edges. Do not try to cover the cloisons as you will accomplish this on the next few firings, and doing so can make the enamels jump the fence to where you don’t want them. 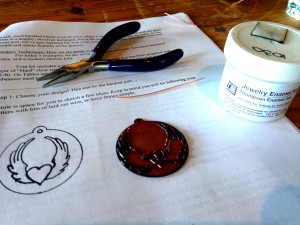 Let the piece dry completely. Any moisture left may steam or even boil if placed in the kiln and can create issues with your piece. The piece can be placed on top of the kiln however, or in any other hot place to dry faster.

Fire the piece again once it is dry. Place the piece into the kiln and let it fire until the powdered enamel becomes smooth and glassy. Once done, remove the piece from the kiln and set aside to cool. 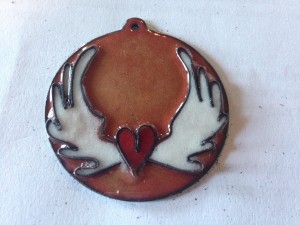 Repeat steps 6-8 until you have built up enough layers for the surface to be even with the wires. My piece required three applications of enamel. Gwenllian says that another finishing technique is to build up the enamel just over the wire, and stone (sand) it all to one flat surface—start with a stone or coarse sandpaper, and build up to finer grits until it is smooth and polished. Please note this needs to be done as a wet-sanding method because of the glass.

At this point you also have the choice to let your edges keep the oxidized look from firing, or you can file or sand them to the clean copper again, this is up to personal preference. I chose to leave mine as they were since I’d applied the enamel all the way to the edges. You can now loop a bail through the hole and show off your piece.

Here is my completed cloisonne pendant!

Thank you for sharing your knowledge and passion with us all, Gwenllian! 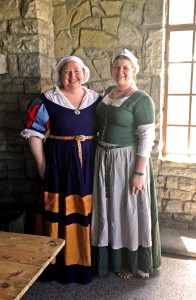