We’re home from our first Pennsic War! The Midrealm didn’t win, but we certainly feel like victors! We successfully prepared, survived, and enjoyed a 10-day long SCA event/camping trip filled with both amazing and challenging events. If you want just the highlights, check out this short video I made of our “Epic Pennsic” — it even has a soundtrack and some battle footage.

As is to be expected, our Pennsic was not perfect. But I believe strongly that mistakes can be the best path to success (if you learn from them!) so it’s all okay. Here are the bumps in the road we encountered:

That list isn’t so bad, really! Much worse things could have happened, such as my painter’s canvas shade fly collapsing due to all the rain. But, amazingly, it stayed up for the entire time and provided MUCH needed shade. I am glad I took a chance on that, but next year we’ll have a proper shade fly that keeps out water, too.

Some of my personal highlights of Pennsic XL are:

I could go on and on, but then I’ll never get any new blog posts up. So I’ll just end it here with some of my favorite photos. And this …. I can’t wait for next Pennsic!

Gregor ready for inspection before war 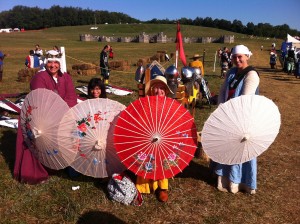 The OTHER Cynnabar Shield Wall 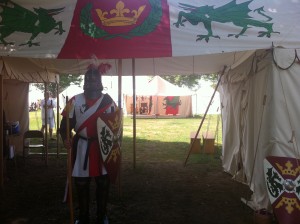 No Comments to “Our Epic Pennsic: Videos, Photos, and Memories!”