Home » Heraldry » Heraldry: First Draft of a Device for Genoveva

Heraldry: First Draft of a Device for Genoveva

I chose my SCA name in May — Gregor followed with his in June. And we just submitted both names for registration with the SCA while we were at Pennsic.

But I’ve been giving myself plenty of time to choose my device, because I want to be sure I like it and will feel good about using it for a long time. So after much thought and research, and ruminating about it at Pennsic where I could see lots of other devices, here’s my first draft: 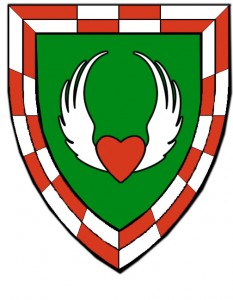 Tinctures: The colors I’ve selected are easy to explain. Green is my absolute favorite color, followed closely by red. And I prefer silver (white) to gold. The fact that these happen to be the same as the Midrealm’s colors are just icing on the cake for me.

Bordure: I chose the bordure (border) because it feels “German” to me.

I believe the description would be: “Vert, a heart gules between wings argent within a bordure counter-compony gules and argent”

I have two concerns with this device:

Here is an alternate drawing of the wings which look less like a crescent. These wings are styled after those which appear on the coat of arms of Germany during the Middle Ages. 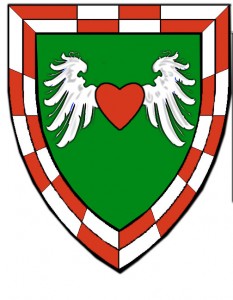 As I understand it, though, I can draw the heart and wings as I like — I just need to get it passed in an acceptable form first.

2 Comments to “Heraldry: First Draft of a Device for Genoveva”