[This is the eighth in a series of articles on SCA artisans who inspire, teach, encourage, and/or make the Society a better place for us all! I learned so much through other artisans while preparing for the A&S Pentathlon, and now it is my turn to shine the love on them, learn more about their craft, and introduce them to you.]

It all begins with gingerbread. I met Helena almost exactly four years ago at the first SCA event I attended after my return to the SCA. Well, at least I know she was there, because honestly the whole event was a bit of a blur for me. The reason I know she was there was because the Baroness of Cynnabar — whom I had also just met — enthused at great length about some amazing “documentably period” gingerbread that Helena had entered in the Arts & Sciences competition and for which she had won a first place. The obvious pride the Baroness displayed for this “Helena” person made me think, “Wow! She must be really talented! I want to do something cool like that one day , too.” It’s the little things that make a big difference.

THL Helena Sibylla does indeed make a big difference, for me and for many others her arts and service touch. Helena’s interests and talents are varied — most already know of her calligraphy and illumination, and many of us have been the recipients of one of her lovely scrolls (including myself—she made my Willow scroll). She also sews, embroiders, weaves (tablet and inkle), and makes clothing for herself and her husband.  She’s also well known for her gorgeous silk banners and her delicious baked treats (gingerbread is just one of the recipes in her book).

One of Helena’s recent tablet-weaving projects

One of the things I enjoy most about Helena’s art is just how much she makes things for other people. She’s currently working on embroidering the Pennsic 44 favors (as seen elsewhere on my blog) and has already made six herself. She paints banners for several baronies and creates heraldic patches for the Order of the Rose cloak. She bakes treats and makes largesse and creates all those scrolls. She just generally gives away much of her art. I commend her highly for her generosity and we are all so much better for it! 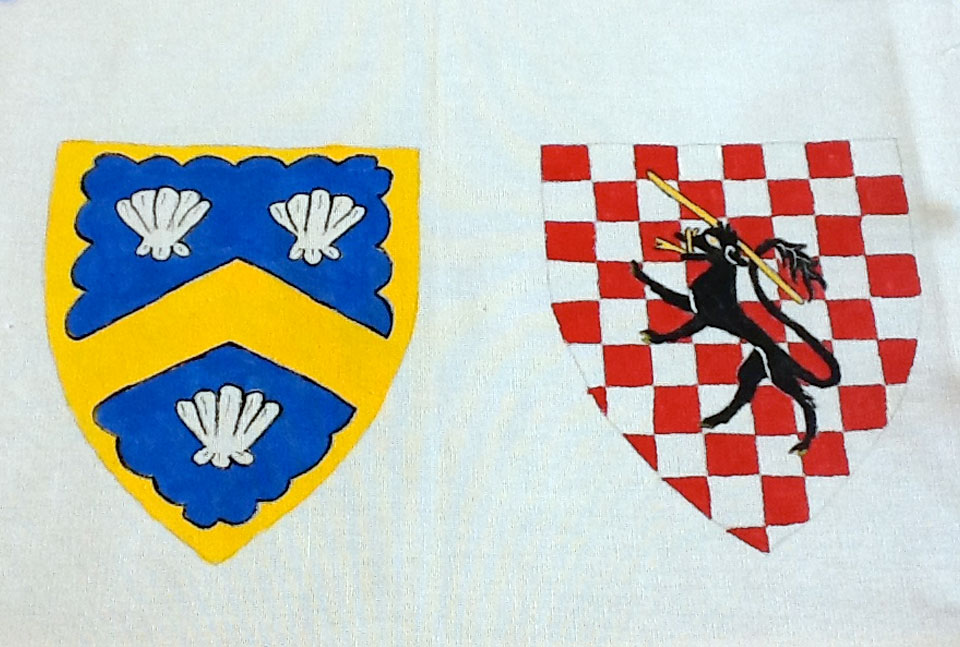 She’s learned much of what she knows because of her participation in the SCA over the past ten years. A basic calligraphy class was one of her first SCA classes ever! And although she’s been cooking and doing embroidery since she was young, she’s learned much more about historical cooking and embroidery techniques because of the SCA. She’s driven to do and make things. When I asked what inspired her, she said, “I like to have something to keep my hands and mind busy and I like to have project goals to work toward. I really enjoy learning about the history of the crafts, objects, and techniques.  I like the process of making things and the satisfaction that comes from challenging myself to learn something new and completing a project!” 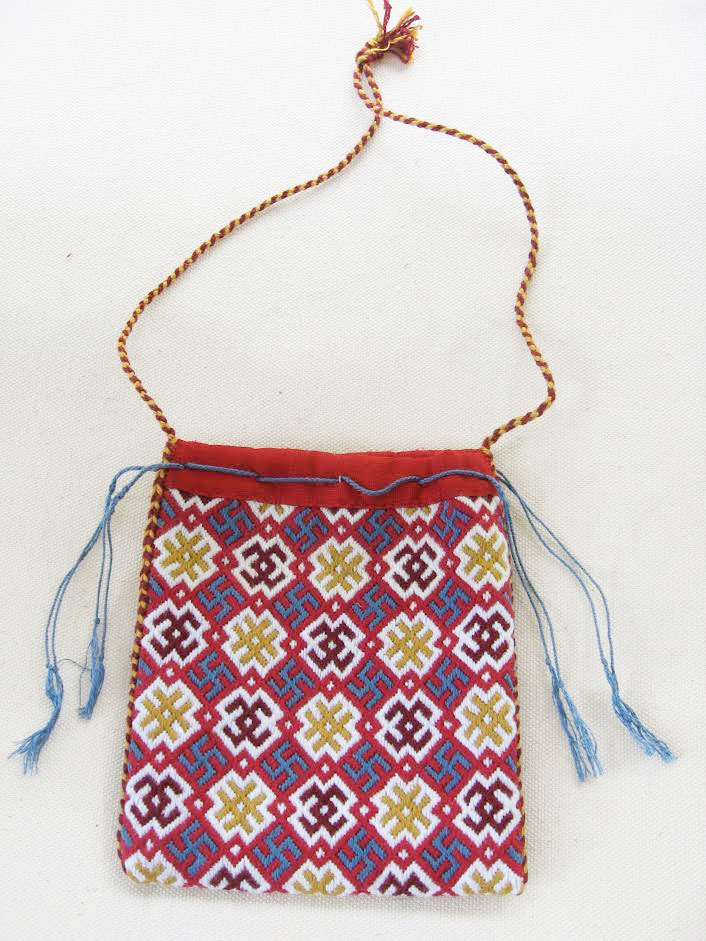 Helena has created many wonderful artifacts, so when I asked her to choose her favorite, it was a tough question to answer. Eventually she settled on her 14th century embroidered pouch she made for the Arts & Sciences Competition in A.S. 46 (2012).  She explained, “This was my first entirely hand-sewn item and I’m really satisfied with the way it turned out.” I remember this pouch well, as it was in the same competition in which I entered my first two entries and I was quite in awe of it.
She is no stranger to the A&S competitions, having entered and received excellent scores several times. Of late, she has been judging more often than entering, but I have hopes she will take on the challenge of a Pentathlon in the coming years. And it should come as no surprise to hear that Helena has been honored as the Barony of Andelcrag’s Baronial Arts and Sciences Champion. She is also a member of the Order of the Evergreen.
While Helena is not apprenticed to a Laurel, she is a protége to Master Straum von Bairzog — he and his lady, Baroness Ute von Munchen, are well aware of her varied interests in the Arts & Sciences. In the Quest she received from Master Straum, she has been charged with learning a new skill and teaching it to others. I’m looking forward to what she might be able to teach us next! Be sure to keep an eye on her blog, http://partifleur.wordpress.com, for news on her upcoming projects. This is also where you’ll find many photos and reports on past projects, including the recipe for the infamous gingerbread.
Helena will be teaching her Introduction to Brick Stitch Embroidery class at Andelcrag Althing this weekend.  She will also likely be teaching at least one class at Pennsic this year, probably the Self-Stuffed Button-Making class. If you can’t make it to her Pennsic class, however, she’s kindly provided us with a tutorial on how to make these historically accurate buttons!

The steps for making a self-stuffed cloth button are simple, but the process does require some dexterity.  You should be able to do some very basic hand sewing with needle and thread.

Step 1 – Cut Fabric Circles. You will need to experiment with the fabric you want to use to see what size circles are needed to make the finished size button you want.  Thinner fabrics will crush more and require a larger circle to make a bigger button, while heavier fabrics like wool or corduroy will crush less so you can start with a smaller circle.  Use whatever you like to make circles the right size.

Step 2 – Stitch Around. With a needle and thread, make a running stitch around the circle of fabric  about one-third of the way in from the edge.  Use a thread heavier than regular sewing thread – you want something that won’t break when you pull firmly. There are several varieties of heavyweight or button thread available.  The Gutermann brand makes a heavyweight thread that comes in a wide variety of colors so you can coordinate with your fabric.  Finish so that the needle is on what will be the right side of the fabric.

Step 3 – Draw It Up. Use the thread to pull in the edges of the circle – make a little drawstring hat for your finger! Pull carefully so you don’t drag the knot through the fabric as you go. Work the fabric around as you’re pulling so the gathers are roughly even. This doesn’t have to be perfect – you’ll be able to even things out in a later step.

Step 5 – Pull It Together. Once you have all the edges tucked in, gently pull the thread tightly to draw the button closed.

Step 6 – Stitch It Up. Now is your chance to lock everything together and adjust the shape of the button. With the gathered side of the button up, push the needle through from one side to the other and draw it tight. Do this at intervals around the button, keeping close to the bottom, gathered edge.

As you stitch, the button will pull together more tightly and become firmer.

Step 7 – Shape Up! Flip the button over and check the shape. If it’s not quite as round as you would like or if there’s a little bit sticking out oddly, it can be adjusted. Here you can see my needle pointing at a funny little bulge on one side of the button.

To fix this, flip the button back over and make a stitch through the area sticking out to pull it in toward the center.

Do this anywhere you need to adjust the shape of the button until it’s as round as you like. These stitches will also help make the button more firm and solid to feel

Once the button is the shape you want, draw the thread to the center on the bottom side and knot it. Leave the tail of thread for attaching the button to your garment when it’s ready and your button is done!