[This is the sixth in a series of articles on SCA artisans who inspire, teach, encourage, and/or make the Society a better place for us all! I learned so much through other artisans while preparing for the A&S Pentathlon, and now it is my turn to shine the love on them, learn more about their craft, and introduce them to you.]

I write to you from a place of deep relaxation and contentment, put there by the amazing Asalah …. despite the fact that she is many miles away. How is this possible? I just applied her magical henna that smells sweetly of earthy lavender. It’s all over my hand, swirling in big hearts, exotic flowers, and adorable curly-qs. I feel light and happy and loved. I had no idea henna was so magical, and I may not ever have known had it not been for Asalah.

THL Sayyidah Asalah al-Hina (formerly known as Anabel de Berchelai) is an avid student of the Safavid period of Persia, making her a fellow 16th century enthusiast. Asalah is best known in our Society for her henna research and application, which she’s been doing for more than eight years now. She also enjoys making clothing and accessories, and in fact this year’s Kingdom A&S project were two pair of sock-boots. 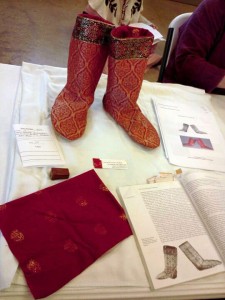 When I asked Asalah why she does what she does, she told me, “I am inspired by many people and things, but my greatest inspiration is researching and documenting arts that, as of yet, have had little to no recognition.” I love this! It’s one thing to go down a well-worn path, but yet another to blaze a new one. She says this is what she loves most about her craft because “being a forerunner in research and experimentation really motivates me to do and try new things.”

Her favorite project so far isn’t so much a created thing as a living thing. She is growing a henna plant, from which she’s created her own paste. She was able to compare her fresh henna against that of store-bought, which is what nearly every is using these days.

In addition to her three Kingdom A&S first place awards in 2012, 2013, and 2014, Asalah is the recipient of the Order of the Evergreen. She is apprenticed to Duchess Rebekah MacTiernan. Asalah makes her home in the Barony of Roaring Wastes in the region of Pentamere within the Middle Kingdom. You can see more of Asalah’s projects and photos at her blog at http://gildedlotushenna.blogspot.com. 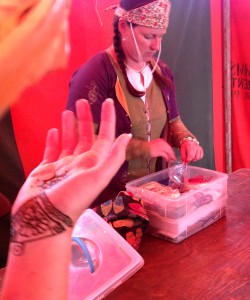 This year at Pennsic I took Asalah’s Henna 101 class, and from this class I’ve made this simple tutorial. It turns out that applying henna had an easier point of entry than I initially believed. Here’s how to do it:

1. Prepare some henna paste and put it in a small cone. Asalah had already done this for her students, but she gave us this information on how to do it: As henna recipes and practices were handed down generation to generation, the basic recipe has probably not changed too much since medieval times. The basic ingredients include henna powder (dried and crushed leaves of the  Lawsonia inermis plant), something acidic to release the plant’s dyes (lemons and limes were found to be used in period), and something sweet and sticky to help the paste stay on the skin (honey was the most common and readily available sweetener in the SCA time period). Essential oils that contain monoterpene alcohols are added to help bring out the dye as well as make the paste smell good!

In a glass, ceramic or plastic bowl mix together 20grams (about ¼ cup) henna powder and ¼ cup lemon juice. Stir with plastic or wooden spoon as metal may react to the acidity in the lemon juice. The paste should be thick, about the consistency of lumpy mashed potatoes. Cover with plastic wrap (push wrap down over surface of henna so it is mostly airtight and add a second layer of wrap over the bowl). Let the paste sit in a warm area (70-80 degrees F) for 8-12 hours. Add 1-1 ½ tsp. of essential oils and about 1 ½ tsp. of sugar. Use a little less if using honey. Stir until smooth, cover again with plastic wrap and let sit again for another 8-12 hours, or until dye release. The surface of the paste will turn brown when it has achieved dye release. Stir in enough lemon juice, a drop or 2 at a time, until the consistency you would like is reached, similar to that of yogurt. Cone or bottle henna and use within 2-3 days or refrigerate up to a week or 2, freeze up to a year. 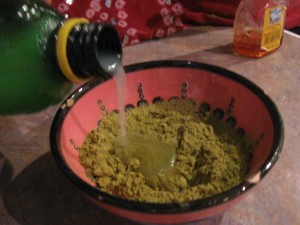 Mylar plastic with which to make a cone

Important Note: Do not ever use a product called “black henna” — these may contain chemical additives that can cause serious and permanent damage to your skin.

2. Wash the area you intend to apply henna to clear it of dirt and oils. If you’re not near a sink, an alcohol swab will do (that’s what came in Asalah’s kit). I prepared my left hand.

3. Cut off a very small bit of the tip of the cone. The smaller the hole in the cone, the finer you can apply the paste and get more details. 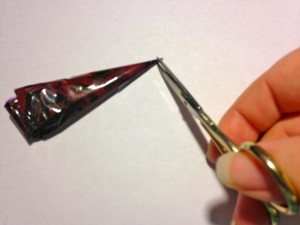 4. Hold the cone like you would a pencil. Apply light pressure at the base to squeeze a small amouny. Practice tracing patterns on a sheet of paper first. 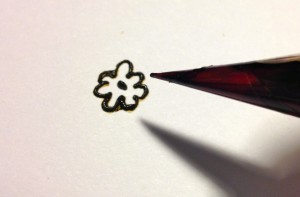 5. Touch the henna to your skin and slowly squeeze the cone as you move. I found I had the best results when I kept the cone lightly against my skin and went carefully and fast enough that the paste did not bunch up. I recommend you start a design in the middle of your area and work outward — that worked best for me. 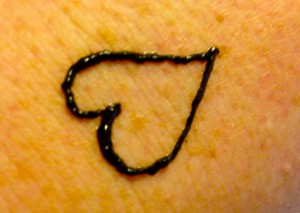 I started with a modest little heart. 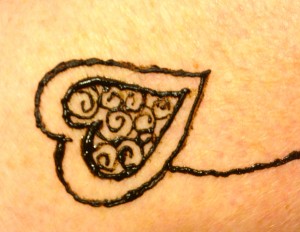 Then I added some curly-qs inside the heart. 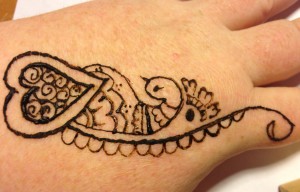 And then a peacock! 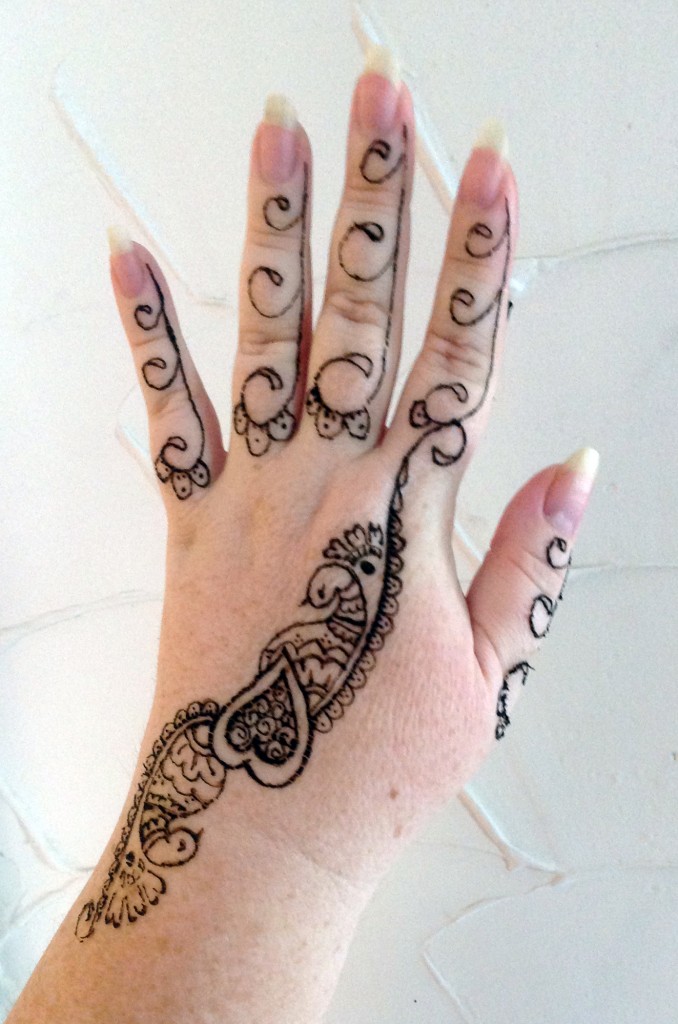 I had so much fun I kept going and ended up with this!

I still had henna left in the cone, so I went for broke and did the inside of my hand, too! 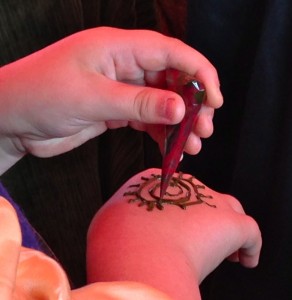 I wasn’t able to photograph myself applying it, but here is a student at Asalah’s class putting on her henna.

6. Once your henna has dried to the touch, but is not yet crackling and falling off, seal it with a lemon/sugar mixture. I mixed one tablespoon of sugar with one tablespoon of lemon juice, microwaved it for 30 seconds, then allowed it to cool. Then I lightly dabbed the henna with a cotton swab. 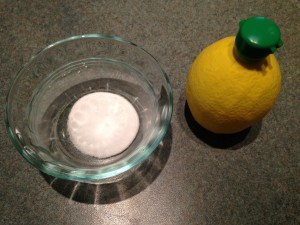 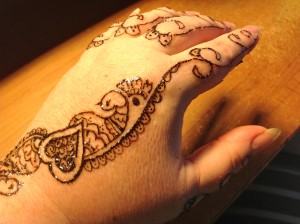 My sealed design on my hand

7. Now let your henna paste stay on for as long as you can. (I am currently typing this article one-handed as my henna paste is still on). So far its been on for 2.5 hours, which is reallythe minimum. If you can, keep it on for 6 hours. You can leave it on overnight if you wrap it in some tissue.

8. When you’re ready, the paste can be scraped off. Do not wash it off and avoid contact with water for 12-24 hours, as getting the stain wet too soon may prevent it from darkening fully. It should darken into a reddish brown over the next 24-48 hours — to protect it, you can apply a thin layer of vegetable-based oil or beeswax-based balm before showering or bathing. 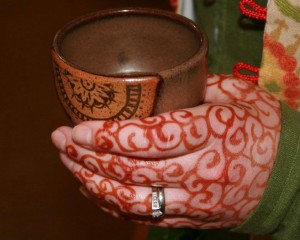 Tip: You can apply henna to wood, fibers, and hair, too! 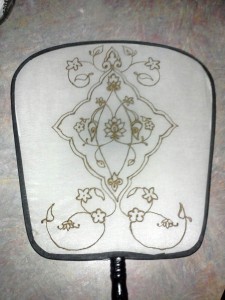