[This is the first in a series of articles on SCA artisans who inspire, teach, encourage, and/or make the Society a better place for us all! I learned so much through other artisans while preparing for the A&S Pentathlon, and now it is my turn to shine the love on them, learn more about their craft, and introduce them to you.] 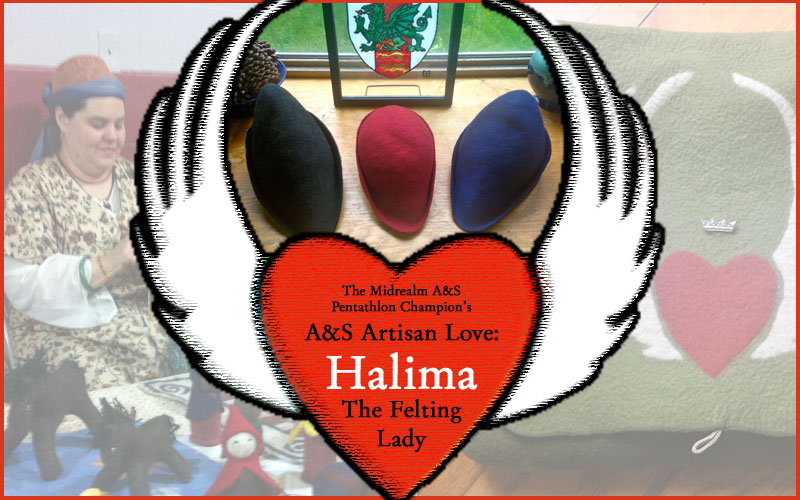 THL Sayyida Halima bint al-Rabi’i, or “Halima” as she is known by most, is the very first artisan I noticed as a newcomer to the SCA. Her work was on display at my first event, and I remember staring at it for a while trying to work out how on earth it was created. It mesmerized and confused and inspired me. What I now know is Halima is a felt artist who makes incredible works of art from wool.

So just what is felting? Felting, or more specifically wet felting which is Halima’s technique, is the process by which warm soapy water is applied to layers of animal hairs placed at 90 degree angles to one another. Wetting and soaping causes the scales on the fibers to open, while agitating them causes the fibers to latch onto each other ….creating felt! Here are some of the beautiful things Halima has made with wet felting:

“When making felt I feel that I am having a conversation with it and coaxing it into the form I want it to have,” writes Halima. “You have to be continually mindful of how the wool is reacting during the process and alter your actions accordingly, that is listening to what the wool tells you.”

So when Halima offered a felting hat class, I eagerly signed up to learn more. During the class I molded the fibers into a complete hat … and it was amazing! Here’s a quick summary of what Halima taught us that day for those curious how this felting thing actually works!

1. Cut out a resist (from cardboard in this case) slightly larger than the desired hat size.

2. Lay two layers of wool fibers over the resist in alternating directions (one going up/down, one going side-to-side). Allow the wool to extend a bit beyond the resist. 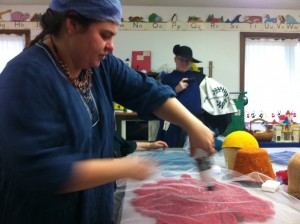 4. Lay a fabric netting over the wool and gently press it down to distribute the water and condense the wool.

5. Flip it all over (wool, resist, netting) and pull the wool around the edges.

6. Add more wool to the backside of the resist in the same alternating, 90-degree-angle fashion as step 2, so that each side now has two layers of wool. (You can add more wool, at 90 degree angles, for a thicker hat.) 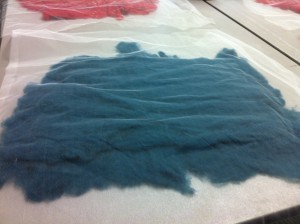 7. Keep the wool thoroughly wet, but not too wet, and rub the wool on all sides in a circular motion to “felt” the wool. Keep the fabric netting on top of the wool to keep the wool in place and avoid having the wool stick to your hands. Rub the wool until it has felted to the point where it will not pull apart when pinched. This took a while!

8. Cut open the bottom of the felted wool and pull out the resist.

9. Place the hat on a towel and roll it up tightly around a stick, then roll it back and forth about a dozen times. Halima suggested using our feet to roll it! Unroll, re-roll in the opposite direction, and repeat. (This rolling presses out the creases and shrinks it in a controlled way.)

10. Place the hat on the hat block or a person’s head, then stretch over to smooth and mold into the shape desired.

11. Rinse the soap out of the hat, trim the edges, and allow to dry.

12. Wear your stylish hat! Here’s the hat I made in that class: 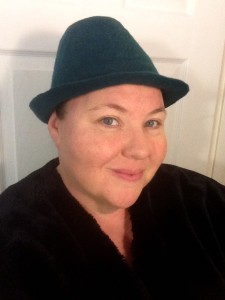 This was a just a quick description of what I learned from Halima — I recommend you take one of Halima’s classes to get your hands wet and soapy and felt something yourself! Check Halima’s web site at http://www.wanderingsheep.com/ for upcoming classes! 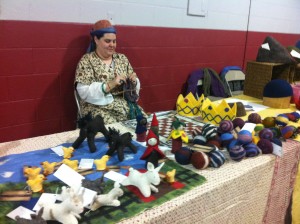 Halima also takes commissions and sells her creations in her Etsy shop and at at SCA events (I believe she’ll be at Border War). Here’s the beautiful bag I commissioned from her — I intended it to be a bag to hold a first-aid kit, but now I just use it for my all-purpose bag. I’ve been using it for two years now and look how lovely it remains! It holds its shape remarkably well. 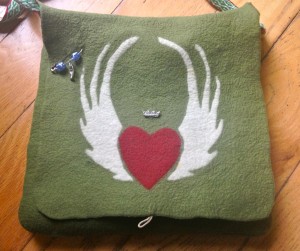 Halima’s SCA A&S achievements include the Order of the Willow and Order of the Evergreen, as well as being selected as Cynnabar’s Baronial A&S Champion in 2010. Halima was the founder and event steward of Fiber Faire and Fiber Faire 2, which focused on the fiber arts! Halima also enters her creations at the Midrealm A&S competitions, one of which I recently had the opportunity to transport for her. Here is her 2014 A&S entry — three delightful bycocket hats!

THL Halima is a student of Master Henry Kersey of Devon and resides in the Barony of Cynnabar. You can reach her through her web site at http://www.wanderingsheep.com.

Please help share the love for A&S and the artisans who create it by sharing this post with your friends! And if you know of an artisan that deserves to be called out, please reply here and spread the word-fame!

No Comments to “SCA Artisan Love: Halima, The Felting Lady”

Click here to cancel reply.
Tutorial: Simple Canvas Dayshade for Events (with or without wings) The Midrealm A&S Pentathlon: My Journey, Misadventures, and Resolutions
Subscribe RSS