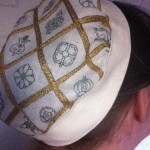 I’m pleased to report that I have finished my blackworked and plaited braid caul. I had the pleasure of displaying and wearing the caul the first time two days ago at 12th Night! It looks really lovely and I’m very pleased with it. Many thanks to Countess Ianthe d’Averoigne, author of The New Carolingian Modelbook and member of the Order of the Laurel, for the use of two of her charted botanicals which appear as fills in my design. I charted the rest of the fills from various period extant pieces, which you can read all about in my documentation below! If you’re interested in making your own caul, cap, or other blackwork/braided item, I refer you to my tutorial booklets on Blackwork Embroidery and the Elizabethan Plaited Braid Stitch. All I ask in return is that if you make something that was inspired by something I did or wrote about, please send me a note and a photo!

Photos of my blackwork and plaited braid caul, both in progress and completed: 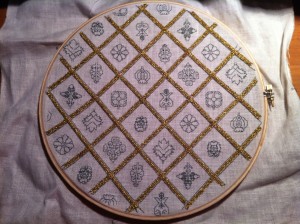 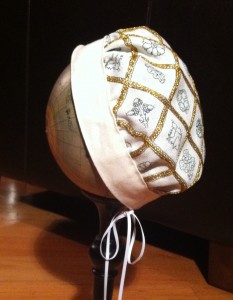 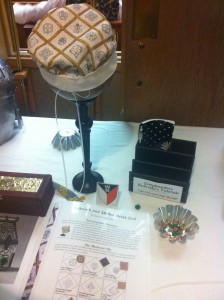 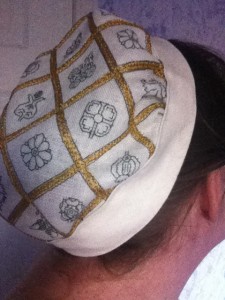 Documentation for my blackwork and plaited braid caul:

Documentation Summary
Linen coifs and cauls were de rigueur attire for most women in 16th century N. Europe. I had already created several simple linen cauls, but wished for a more sophisticated, decorative head covering. My research showed that coifs and cauls could be elaborately embroidered, and blackwork and plaited braid stitches were employed. After studying examples in the Victoria and Albert Museum, I used the backstitch and Holbein stitch in green silk thread, as well as the plaited braid stitch in gold metallic thread, on 32-count linen. All of my blackwork fill patterns are based on historical sources found in th Victoria and Albert Museum, photos of extant pieces in Patterns of Fashion 4 by Janet Arnold, and historically-based patterns in The New Carolinginan Modelbook.
The Blackwork Fills
I charted all but two of the 10 different fills myself by closely studying the original embroidered element. All fills are floral, which was a very common element in 16th century embroidery, as evidenced by the extant pieces available. 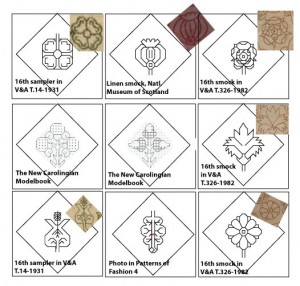 The Double Plaited Braid Stitch
While doing the research on my blackwork fills, I came across a number of extant pieces that used an elaborate stitch in silver-gilt thread, such as this 16th c. coif in the Victoria and Albert Museum (T.28-1975).

It was necessary to research and practice this stitch for several weeks before I perfected the correct technique and look. No books that I found contained instructions on how to perform this stitch, and many experienced embroiderers consider it to be the most difficult stitch. Because so little documentation existed on it, I created a step-by-step tutorial and published it at my web site and distribute it at events where I display my work (see attached tutorial).

The Pattern
The pattern is an original designed by myself, but the overall “feel” is inspired by an extant 16th c. smock in the Victoria and Albert Museum (T.326-1982). Of particular note is the lattice shape sections filled with the floral designs. I also charted three of the flowers that appear on this smock for use on my caul. I feel confident that the pattern I devised is, while original, at least period appropriate based on the stitches, motifs, and overall design.

The Caul
I chose to make a caul rather than a coif because that is the type of headcovering worn more frequently by the 16th c. clothing styles I enjoy, such as German and Flemish. An example can be seen in this portrait below of Judith by Lucas Cranach the Elder (1530). My caul is made completely of Belgian linen and hand-stitched with white silk thread. A white grossgrain ribbon is encased inside the band to allow for adjustment with different hair styles. 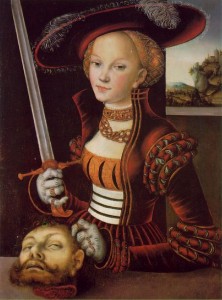 This documentation is also available as a formatted PDF file which you can download for personal use.