Home » Sewing » A Dressmaker’s Pell: Making My Own Dressform from Duct Tape!

A Dressmaker’s Pell: Making My Own Dressform from Duct Tape!

Last night’s pattern making went well, but this morning I decided I needed a way to see the muslin dresses better. I guess I wasn’t quite confident to cut out my linen without knowing that the dress really is constructed right. So this morning I got up and researched dressforms. I learned they are expensive to buy, but cheap to make if you have a bit of patience and a few easy-to-obtain supplies. So I went out and got a 60-yard roll of duct tape and some fiberfill (about $20 altogether). I put on an old t-shirt and began covering my torso carefully with duct tape.

Notes: The t-shirt I chose was close-fitting, but not super tight. And it was important it be a bit long so I could continue the duct tape down over my hips. You want to tape yourself closely, but not so tight that it compresses or changes the shape of your body at all. This is NOT the time to suck in your tummy! The taping goes much faster and easier if you have a helper, but I did not … and I still managed to do it. The upper back was very difficult, and I couldn’t quite get it all. I just did the major parts (across the shoulders and over the shoulders) and that worked fine until later. For reinforcement, you’ll want to do on layer where the tape is mostly horizontal (wrapping around) and a second layer with the tape vertical — this will help your tape job keep its form after you later remove it.

Tip: If you try to do this yourself as I did, cut off strips of tape in advance and line them up on a safe surface. It makes the whole process go faster!

You’ll want to pay particular attention to your curvy bits so you retain them properly in your dressform. I did the “cross your heart” method on my chest and it worked pretty well for me. You’ll want to use shorter bits of tape to stay true to your curves. I look like I’ve got some sort of weird duct tape armor harness on in this photo!

By the way, you’ll want to wear appropriate undergarments when you do this, or your dressform won’t drape your clothing in the way you want.

After I was all taped up, or at least as much as I could manage on my own, it was time to cut it off. If you have a helper, they could cut the tape and shirt up the back. As I did not, I cut it right down the front.

Note: Do not use your best scissors for this job. The duct tape will leave gummy residue on your scissors … blech! 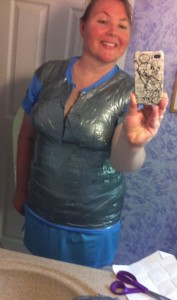 Cutting off my taped shirt

Tip: Be really careful when cutting the shirt off that you don’t cut anything else you may be wearing. I thought I was doing well until I realized I’d cut a little snip out of one of my favorite skirts. I think I can mend it, but still … what a pain!

Once the duct taped shirt is off, you’ll want to tape the cut seam back up. Be sure this is well taped, because this seam will be under a lot of pressure later. Now you’ll want to stuff your dressform with fiberfill, or something similar. Before I stuffed mine, I mounted it on a pole (thick dowel from Lowe’s) which is screwed to a base made of leftover wood from my trestle table. I then attached a hanger to the top of the pole, making sure the “shoulders” of the hanger were at the same height as my own with my shoes on. It was important to me that the dressform be the same height as me so I could use it to hem my skirts! 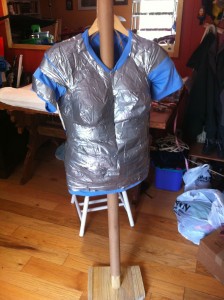 My unstuffed dressform on a homemade stand

Once you’ve got your dressform the way you want it (you could also just put the hanger in it, close up the bottom, and not use a stand), it’s time to stuff it! I used cheap polyester fiberfill, but you could probably use whatever you had that wasn’t too heavy. Be sure to pack the stuff in well so you don’t have areas that are too soft or curves that are pushed in (or get pushed in later when you’re putting clothing on it). When I was done with the stuffing (it took me 2.5 bags), I made a neck out of a bit of leftover muslin and some duct tape. I then reinforced the top of the dressform with more duct tape, this time using a tan color (“cookie dough”) so it would look a bit more natural. I double-checked that the dressform was the same height as me, as well as double-checked its measurements against my own. It worked! I dressed it up in the smock I made last night and my farthingale… looks pretty good, I think! And when I tried the kirtle on it, remembering to pin up the straps a bit, I could see that the kirtle pattern I drafted does indeed look good, and I’m ready to make the real thing! 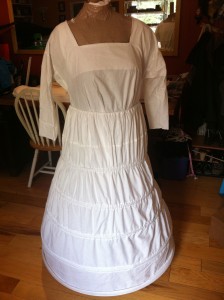 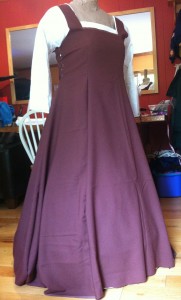 As I was making this dressform, I couldn’t help but think of Gregor’s pell and how he made it to his own measurements. Well, this is MY pell! I can use it to practice my art without fear of running myself through with a stick pin! 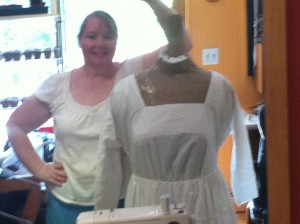 Me and my new dressform!

2 Comments to “A Dressmaker’s Pell: Making My Own Dressform from Duct Tape!”